Jewellery Trends Across History: What Lives On?

Jewellery has always been an integral part of fashion. But jewellery is more than ornamentation: it’s a means of communication. Take a walk down history lane with us and have a look at jewellery trends through the decades.

Home » Exclusive Jewellery » Jewellery Trends Across History: What Lives On?

Jewellery has always been an integral part of fashion.

But jewellery is more than ornamentation: it’s a means of communication. Take a walk down history lane with us and have a look at jewellery trends through the decades.

By the roaring 1920s, geometric designs and linear styles were in – and the asymmetrical aesthetic was out. Women loved funky, bohemian Art Deco-inspired pendants, stacked bracelets, heaping strands of pearls, and gemstones alongside jewelled headwear. Intricately designed pieces and creative mounting styles became incredibly popular, with the boom in economy after the end of the First World War. The period’s favourite stones included sapphires, rubies, emeralds, black onyx, and red coral.

The glamorous 1930s and ‘40s were greatly inspired by the glamour of Hollywood. The two decades mark an influx of film-inspired designs, from rhinestones and brooches to the popular emerald stones. Plastic and inexpensive gems were introduced to the jewellery industry, making the iconic jewellery trends of the time widely accessible. “A Diamond is Forever” campaign invigorated America’s love for glittery things, and diamonds were worn in every piece of jewellery possible, alongside gold.

From diamonds to colourful gems and beyond in jewellery trends

The preference for glamour continued well into the 1950s, when fashion began to favour a more modern style, featuring sleek cuts and simple tailoring. Jewellery then took centre stage, with dramatic and extravagant pieces, engraved finishes, and bold pairings of diamonds and pearls once more. Gold jewellery remained a favourite, but platinum and copper also grew in popularity. Jewellers began to experiment, designing unconventional settings and slowly transforming jewellery into a free art form.

Unlike the previous decade, the 1960s were characterised by practicality and functionality. Handcrafted pieces became popular, as did glass and crystal pieces, and non-precious metals. Floral motifs returned, and stacked bangles, cocktail rings, and layered necklaces (made with bold-coloured beads) were loved by all. Large geometric shapes mimicked the 1920s Art Deco movement. Circles, diamonds, spirals, and hexagons were widely featured in this decade’s jewellery designs.

Boldness and individuality led the jewellery trends in the 1970s. Coloured quartz – see our World Diamond and Rosé Quartz Ring –, lapis lazuli, and coral were fashionable, as were beaded jewellery pieces. Large, gold earrings made their debut, and the disco movement only brought about more exuberant statement pieces. Bohemian-inspired pieces were preferred, lightweight materials, like plastic and wood, were popular due to their practical functionality, and leather made an appearance on bracelets and headpieces.

In the 1980s, everything was loud, proud, and big. Punk-rock styling took over a great deal of fashion arenas. The desire to make bold statements and show off brought out the need for multi-purpose jewellery and versatility in designs. Gold was still everyone’s favourite, but mass-produced jewellery crafted of plastic, wood, and inexpensive metal was everywhere. Oversized earrings, cuffs, and necklaces were the jewellery of choice, and brooches were back.

The glam 1990s were characterised by a fun, feisty attitude. Feminine details were paired with masculine styling – grunge met flower child in the ‘90s. Beads and choker necklaces were seen everywhere, and body jewellery also made its debut. Silver, seen as tasteful and unpretentious, became the most popular metal. Most of the jewellery pieces were either inspired by the punk rock scene or by bright pop music. This was also the decade where male jewellery first saw a significant rise in popularity.

The rise of hip-hop greatly influenced the jewellery trends of the 2000s – flashy and bold. Gold and silver held equal stake in metal popularity, with large hoop earrings being the classic jewellery staple. The Boho-chic style also grew quickly. Other iconic pieces included chunky bracelets, cocktail rings, and personalised jewellery. The military inspired jewellery came in trend, too, with its dangles and studs – but it competed with lots of glitter, sparkle, and neon colours throughout the decade.

Enter the 2010s (and, slowly, the 2020s. This decade, marked by the rise in social media platforms, has clearly made individuality the primary focus. Nearly anything has become acceptable, as consumers asked for innovative and experimental jewellery to really make them stand out. Multicultural influences have impacted everything from gems to the production process. Minimalist, lightweight, and durable jewellery is now widely preferred.

But what about – gasp – history when it comes to jewellery trends?

After all, jewellery is as old as humankind. It was in 5000 BC when electrum (the natural alloy of gold and silver) was first used in jewellery, to represent royalty and power.

Since prehistoric times, hierarchy, prestige, and power have been expressed through jewellery. What initially appeared to be a mere ornament was much more, marking one’s allegiance to a society. Jewellery also had amuletic and talismanic functions, was worn as a sign of personal affection and fidelity and marked special occasions in life (just like today!). It only makes sense, then, to remember what used to be popular back in the day. Because, every now and then, a trend will come back and stick around for a bit…

Medieval jewellery (1200–1500) reflected an intensely hierarchical, status-conscious society. Royalty and the nobility wore gold, silver and precious gems, while lower ranks wore base metals, such as copper. Often, jewels had cryptic or magical inscriptions, believed to protect the wearer. Medieval jewellers included not only necklaces, bracelets, and rings, but also other personal adornments, such as buttons, belt buckles, buttons, and decorations for weapons.

Victorian jewellery (1837 to 1901) was influenced by different periods, including Classical, Gothic, and Renaissance. Religion was a big part of life, and cross pendants – such as our very own Opera Deus ones –  were frequently worn. Women enjoyed lockets, hair combs and pins made of gold, enamel, and gemstones. All-black jewellery made of jet, onyx, and black glass, featuring dark motifs like skulls and skeletons, was also popular. Other common motifs included flowers, peacocks, insects, and cameos. Diamonds were reserved for evening events. During this era, the amount of jewellery acquired established a person’s status.

Although short-lived, the Art Nouveau movement (1890-1910) caused a dramatic shift in jewellery design.  It drew upon nature for inspiration and emphasised soft curves and elegant lines. Diamonds took a back seat to other precious stones, and new materials and techniques were used to develop fabulous designs. Alongside Art Nouveau, Belle Epoque (1901-1915) designs also flourished. This period is known as the Edwardian era, and it was characterised by a mood for renewal and individually crafted luxury items. The designs were both delicate and elaborate, with diamonds at the forefront (but coloured gems were also featured in smaller ways). Jewellery expressed emotions, winged women were symbolic of emancipation, and nature was metaphorically interpreted. Other popular motifs were bows, ribbons, and flowers.

The Art Deco era (1915-1935) was largely inspired by the art movements of the time. Sharp, geometric patterns celebrated the new machine age. At the same time, exotic designs inspired by Asian and Middle Eastern art and architecture hinted that jewellery styles were becoming truly international. The Art Deco era blended glamour, luxury, and the immense technological advances of the time. Women preferred long necklaces, piles of bracelets, and elaborate earrings, as well as dense concentrations of gemstones.

Retro jewellery (1940-1950) was meant to offset the sombre and austere clothing styles of the World War II era. Materials for jewellery were scarce, but the desire for it never ceased. As a result, jewellers turned to budget-friendly stones like aquamarine – see our World Diamond and Aquamarine Ring – and citrine to replace diamonds, sapphires, emeralds and rubies. Pieces were big, colourful and playful. Feminine motifs such as flowers, bows, and butterflies were popular, since they softened the era’s masculine clothing style. Plus, naturalistic designs of florals, animals, and birds contrasted the grave reality of the war.

Following the end of World War II, Mid-Century (1960) jewellery became more feminine, precious and elegant once more. Common motifs included nature, starbursts, and people. Highly textured pieces made of mesh, brushed or braided metal were often incorporated. With the war over, there was a return to the traditional fine jewellery materials like platinum and diamonds. Matching jewellery sets featuring a single motif through a necklace, bracelet, brooch, and earrings set became extremely popular.

Beginning in the mid-1960s, the boundaries of jewellery have been continually pushed and redefined; this is the Modern era. Conventions are continuously challenged, and new technologies and materials keep overturning the notions of status traditionally implicit in jewellery. Avant-garde artist-jewellers push the boundaries of scale and wearability to the limits, and jewellers borrow from various different cultures, giving pieces a truly multicultural flair. To which we can only say – bring the shine on! 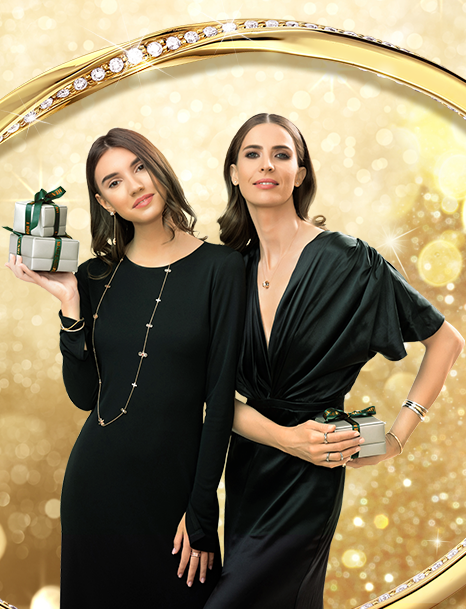 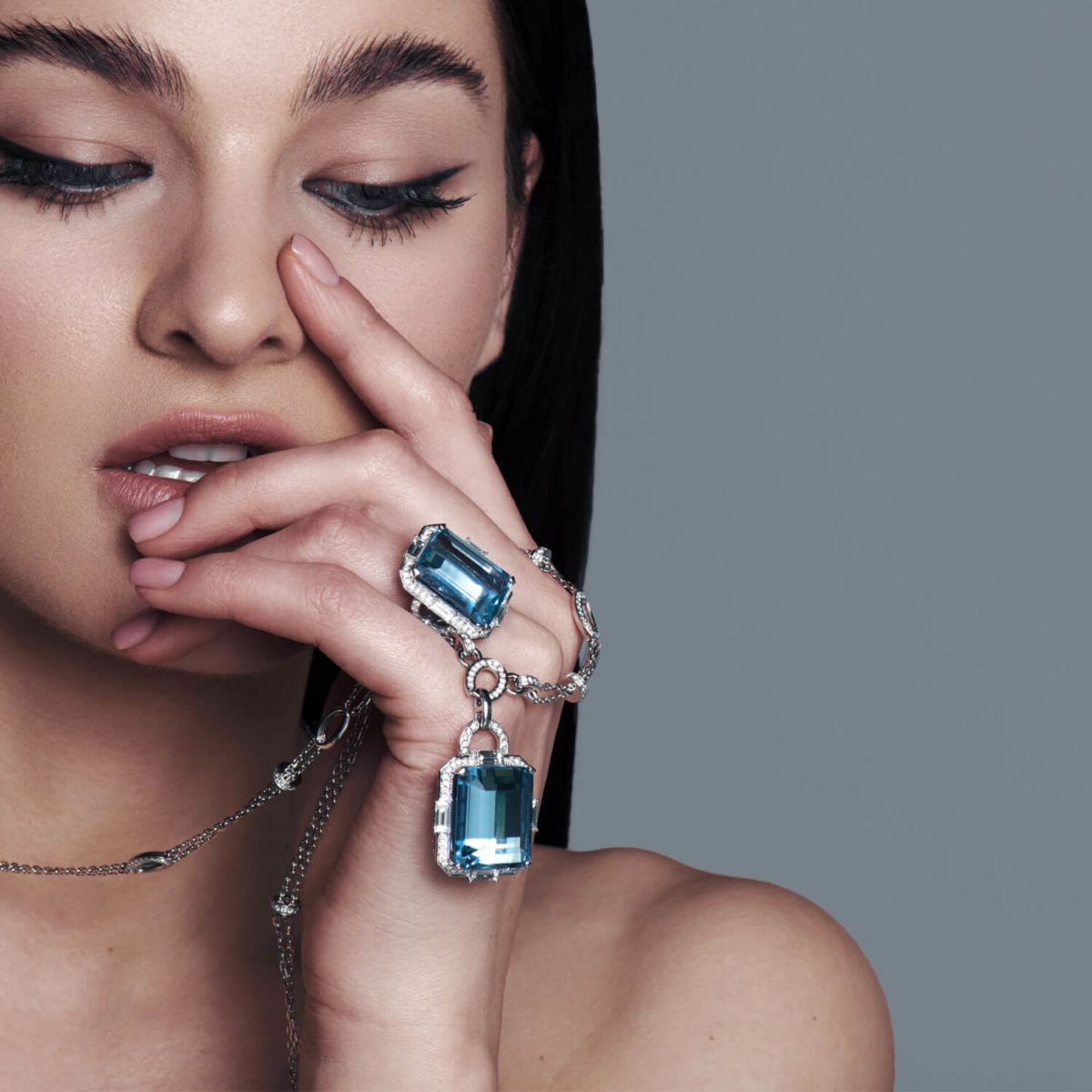